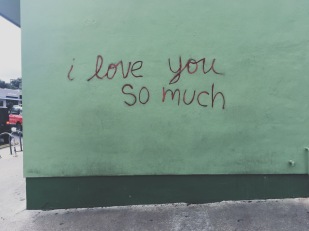 When I was 17 and preparing to embark on my final year of competitive dancing, I came across a song that provoked me in a new way.

I knew I needed to move to it. I sent it to the woman who was going to choreograph my senior solo and told her this was “the one.”

“Say What You Will” by Damhnait Doyle.

This piece of music is mostly about death, but for me, I thought of it as life.

The opening line with its haunting essence goes:

“If I were to die today my life would be more than okay, for the time I’ve spent with you was like a dream come true.”

When I first heard those words, I was taken by them because I couldn’t really relate.

At 17, I didn’t feel that I had had enough time with anyone. Or even with myself.

My life felt too unsettled. Like I was constantly standing on a ledge, waiting to be pushed into whatever was coming next.

Granted, I was so young. I didn’t fully understand what I was hearing or thinking, but I knew enough to realize that it was important.

The lyrics continued so softly that the poignancy pierced all the more. For me, at least.

She repeats, “say what you will before it’s too late” throughout the song.

And there it was. That’s why I needed this song.

Just several months later, my mother was diagnosed with a cancer that just five in a million people get. A cancer with absolutely no treatment. A cancer that, by definition, was fatal.

When the time came to spend my weekends sharing the solo with judges, audiences and my fellow dancers,  it was for her entirely.

My movements were filled with desperation as I tried to use the instrumentation, the lyrics and the curves of my body to express my love.

To tell her that every moment with her was a dream come true. That I cherished everything about our relationship.

But, you see, that was easy.

Our connection was fearless, as many familial relationships tend to be.

It’s also a lot easier to be honest with someone if you really do know your time is limited. The consequence is nearly non-existent.

So, I guess the rest of this is one giant question: why can’t we say whatever we feel to people? For you, it could be your mother. Maybe it wasn’t as easy for you as it was for me.

Maybe it’s a guy you haven’t known long, but you know you have some sort of feelings for him.

We’re so afraid to be vulnerable. To show ourselves.

That said, this fear in particular is kind of justified.

The fear of rejection.

We all preach about how important it is to be honest, but rejection is so often the result of pure honesty. It’s really no surprise that we’re all so afraid.

It’s terrifying to put it all out there to have it shut down. But, isn’t that how we learn? How we grow? It’s how we build strong relationships.

A friend and I often joke because we have all these thoughts. These feelings. But, we feel that we can’t say them to just anyone.

She and I can only identify a few people in our lives who will listen to whatever comes to our minds without judging or assuming or reading too far into it.

We watch movies and TV shows where the guy runs to the airport, buys the most expensive ticket just to get through security to tell a girl he loves her.

And it’s crazy, really. But, in the movies, we expect it.

We love it! We eat that shit up.

Then there’s the girl who’s trying so hard to be “cool,” then by the end of the movie, she finally puts it all out there.

In most movies, the person she’s chasing reciprocates, but then some tackle the realities of unrequited love.

Because that is a reality.

I think what baffles me, though, is that we spend an unhealthy amount of time watching these stories unfold in books, movies, TV shows, plays and musicals.

It’s normal for us to see these outbursts of truth come pouring out of their mouths and into the hearts of the person receiving.  We crave it.

How is it so normal for us to watch these scenarios, but so foreign for us to actually put them to use?

We don’t take leaps of faith with our words. We don’t put it all out on the line, but we yell at the actor as he nearly lets his love get away.

We let so many people get away.

We have this shameful relationship with how we feel because we’re so quick to actually call someone “crazy” when they speak their minds.

We are afraid of saying “I love you.” I think we’re equally as afraid of hearing it.

LOVE! The most important thing among humans, and we can’t say it?

We accuse people of having too many feelings, or feeling things too quickly and somehow this has translated into this negative thing that encourages us to write people off hastily.

Why can’t we just listen? And accept whatever is being said?

You don’t have to feel the same way.

You don’t have to do anything in particular.

It just means that you have to stop making people feel as if they shouldn’t feel or think a certain way.

As if their honesty is somehow unnatural.

Because, let me tell you, I know that we all have similar thoughts and feelings.

We all get hurt. We all feel love. We all get butterflies. We all want to shout something from the rooftop every once in a while.

But, we don’t. We keep it bottled up. We are swift to become frightened, embarrassed or ashamed of how we feel because we’ve become so accustomed to the connotations associated with putting ourselves out there.

So, here it is! Say what you will.

Be courageous with your heart; it can be your most trusted guide.

We’re all human. We’re all feeling something.

And on the receiving end, stop judging people for saying what you’re probably too afraid to say yourself.

The girl isn’t crazy for really liking you after one date.

Your best friend isn’t an emotional basket case because she was hurt by your lack of consideration for her feelings.

The stranger in the coffee shop isn’t insane for feeling compelled to tell you how beautiful you are.

Your ex-boyfriend isn’t pathetic because he says he misses you.

It’s their truth. And it should be valued, whether you accept, disagree or respond in kind.

My hope is that you speak your heart’s contents confidently.

That you take a leap and put yourself out there.

Words unspoken can hold just as much regret as the ones you think you should have kept inside.

Don’t fill space with empty words or silence that drips with fear.

Let your moments be meaningful and filled with candor. Speak your truth so you could die today with contentment and pride. Don’t wish you had said it then.

Say what you will now.